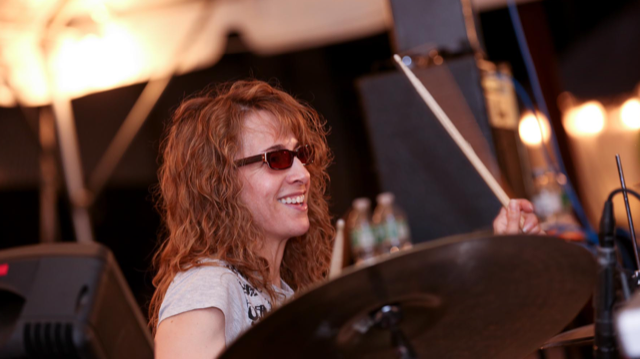 Zoe is is an established musician with wedding bands and other agencies.

Stylus reviews will be featured as they come in!

Add some extra pizazz to your party with live percussionist, Zoe G.!

Zoe always performs with energy and style – her main focus is to create a fun and exciting atmosphere that always gets people out on the dance floor. In 2002, Zoe started playing drums with the band AliveNKickin, best known for their number one hit single, “Tighter and Tighter”. In more recent years, she expanded her talents further as a professional party percussionist, playing with several of the top DJ companies in the tri-state area.

Earlier, she played drums with the house band for Lifetime’s “Girls’ Night Out” stand-up comedy show. A total of 30 shows were filmed and shown in reruns on the Lifetime network for several years. As a result of the show, she was interviewed in the world-renowned drum magazine Modern Drummer.

Zoe has been performing and recording throughout the tri-state area for many years with a multitude of bands, including groups ranging in style from rock to funk to doo-wop to jazz. While attending Queens College, she performed for four consecutive years with The Queens College Percussion Ensemble.

with Zoe before deciding?